Before reading about local variables, check out our article on Variables in Hopscotch first. That article contains information on the different types of variables in Hopscotch. It also includes definitions for words mentioned in this article, such as declaration and scope.

This article contains information on

We have a small demo project to illustrate using local variables: https://c.gethopscotch.com/p/121k0649o2 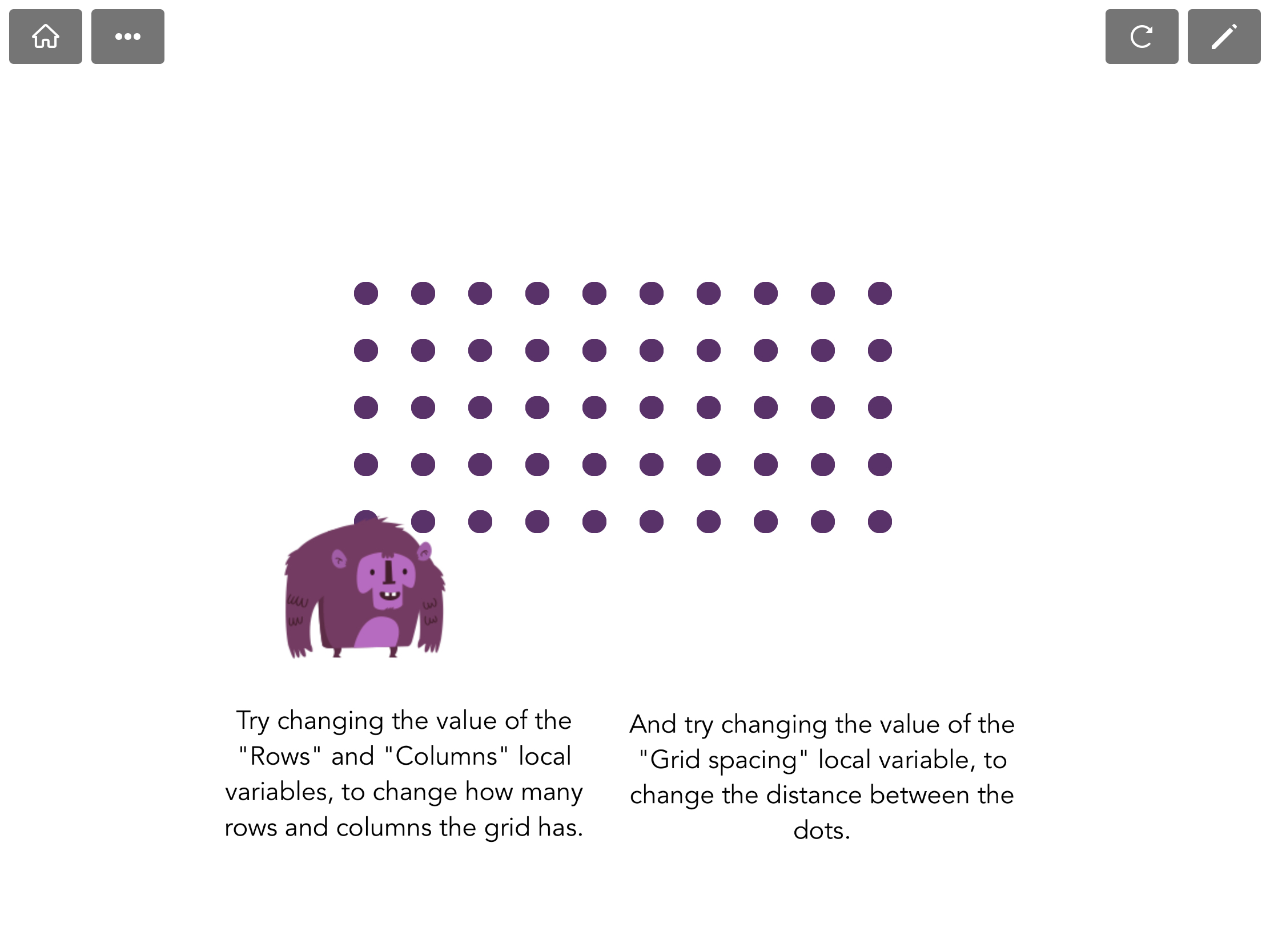 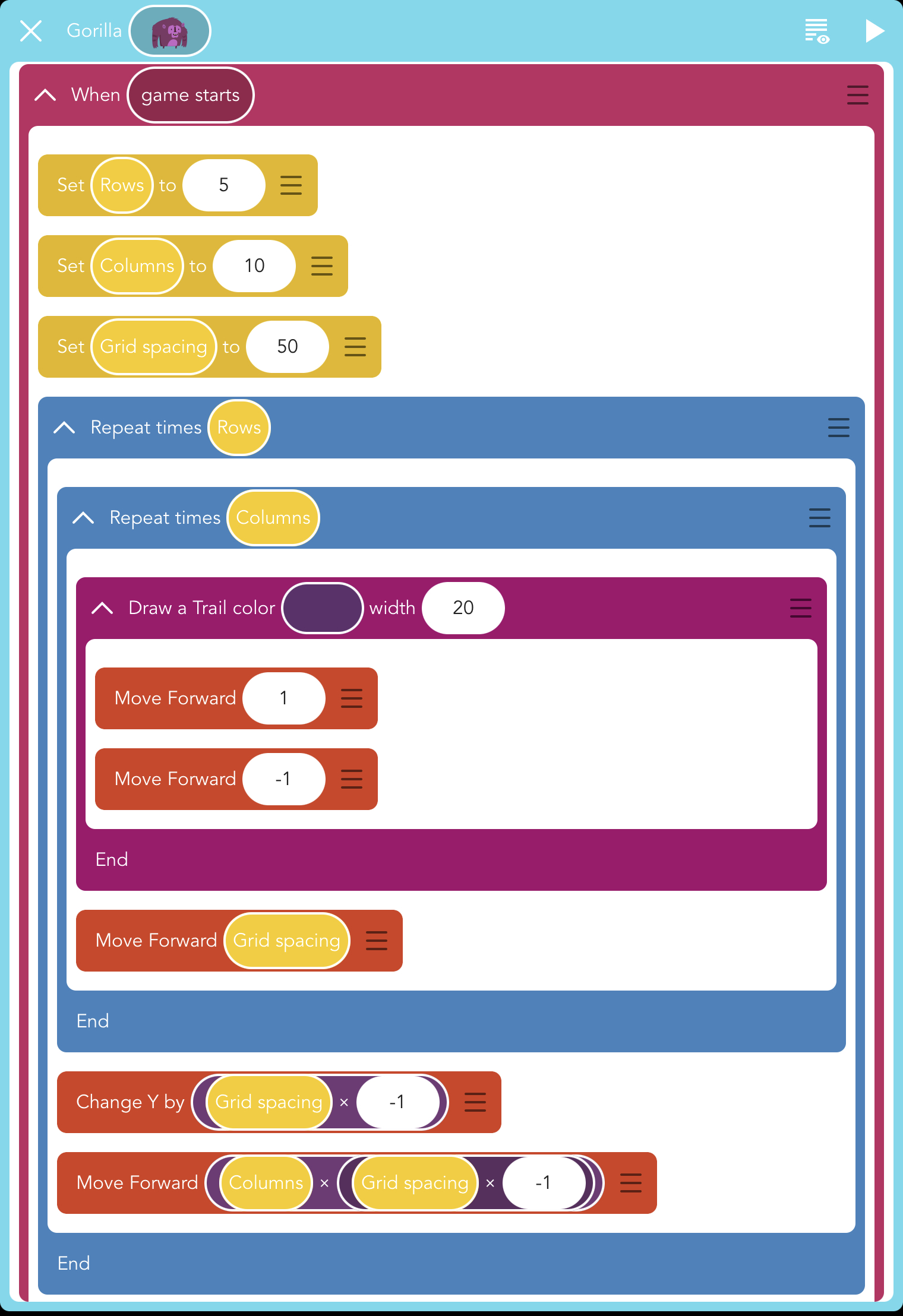 In this case, the advantage of using local variables are:

Under the "Local" section, you can tap "New Variable" to create a local variable. Choose a name for it, and then press "done." It will start with a value of 0 by default until you set it to be another value. 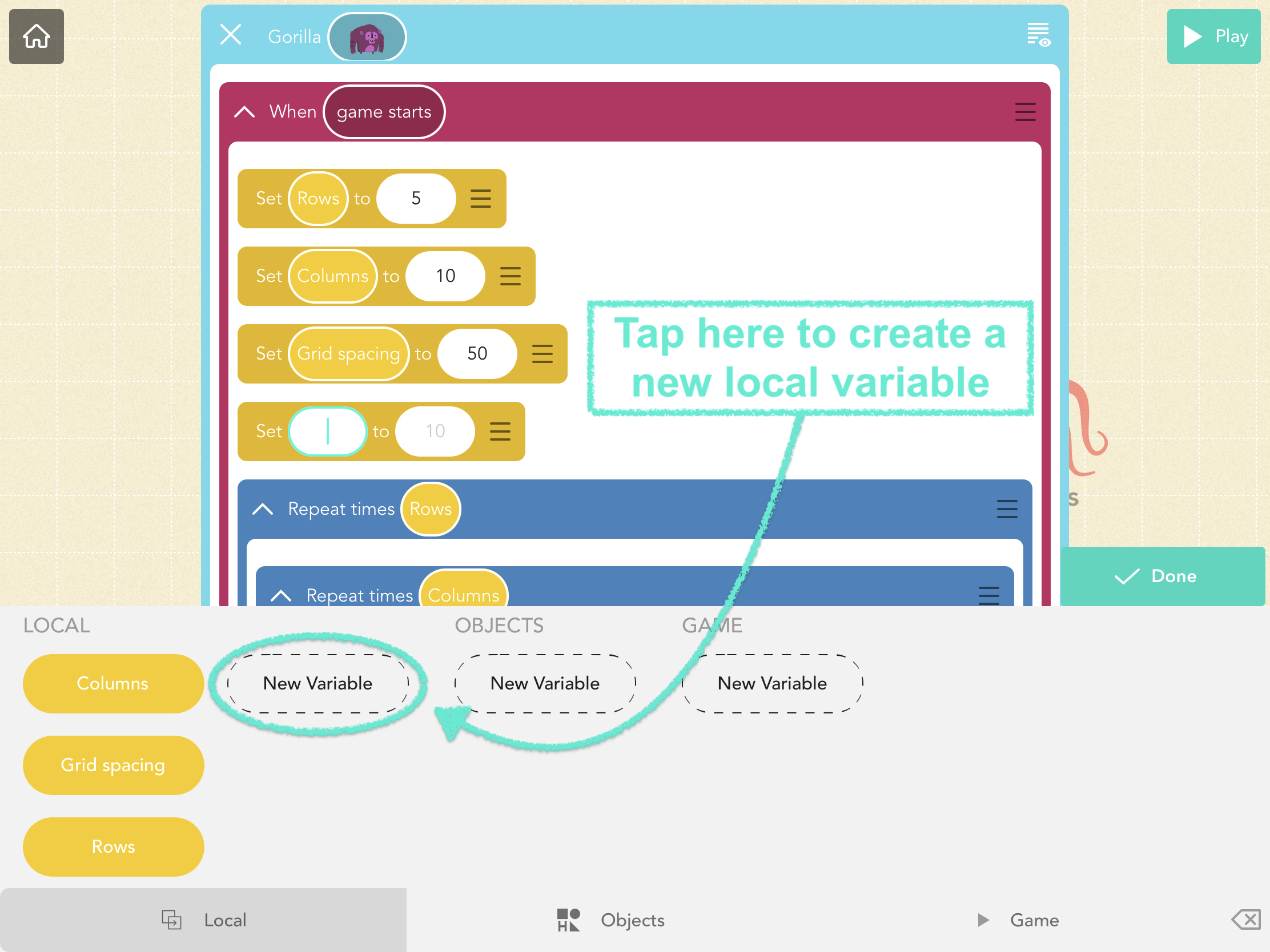 Setting the Scope of Local Variables

The first time you set the value of a local variable using the "Set Variable" block is called declaring the variable. Where the local variable is declared will determine its scope, meaning where an object can access a variable in code.

The scope of the local variable will be the container where it is declared. A container is a block of code in Hopscotch — for example, a pink "When" container, a custom rule or custom ability, a "Repeat" block, a "Check Once If" block, or a "Draw a Trail" block.

Changing the Scope of Local Variables

Currently, when you drag the "Set Variable" block of a local variable - where it is declared - inside or outside of a specific container, you can change the scope of that local variable to the new container.

In the example project, the "Rows," "Columns" and "Grid spacing" local variables will exist in the "When Game Starts" container, where they are declared. 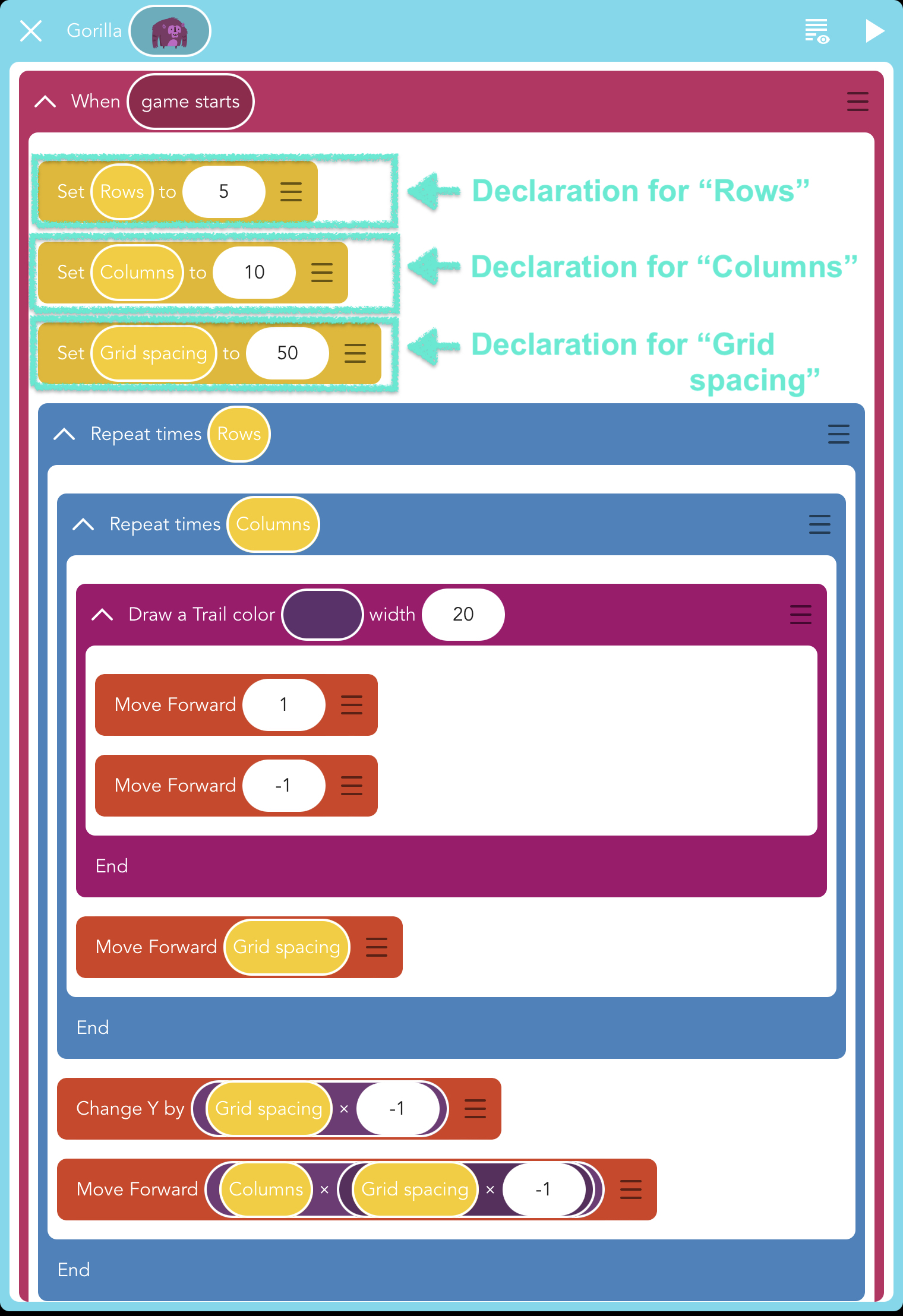 When local variables are used in different containers of an object, they are distinct, even with the same name, since they have different scopes.

In this example below, the local variable "Health" is the same variable used in the "When game is playing" rule and the "When Self bumps Spike" rule.

The two "Health" variables have the same name in both rules. Because the "Set Variable" block is declared outside the two When containers, they have been merged. Without the declaration on top, the two "Heath" variables would have their own values, and changing one would not affect the other. 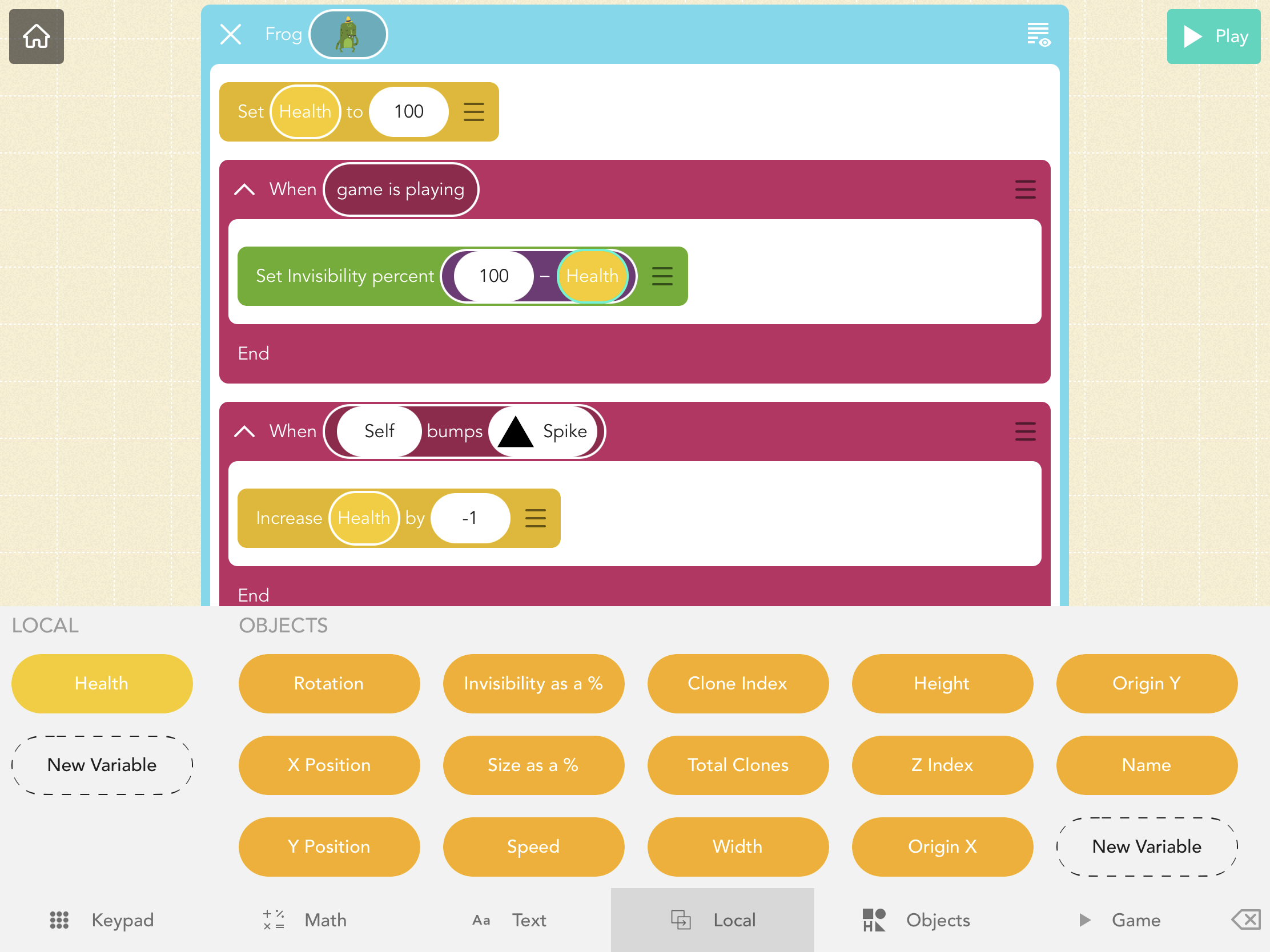 Merged local variables, outside of the When containers, are similar to object variables, but they will exist only for an object when used. So an object will have the "Health" variable only when it uses this code — rather than "Health" always appearing in the Object Variables section of the Variables keyboard, for all objects.

Example with the "Bounce" custom rule